I was bloated. My stomach had a boulder inside of it. Nothing fit. I felt like a pregnant hippo in every single dress I tried on for a wedding over the weekend. I’d go on a limb and say I tried on at least eight possible outfits.

I did try on one dress that looked good with the jacket, but both still felt tight. I didn’t feel comfortable at all. 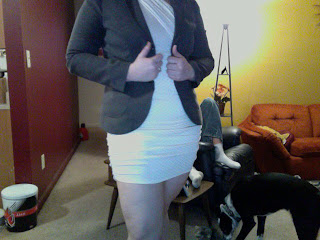 Nothing looked good, which was absolutely devastating because I’ve been working so hard at the gym lately. I curled up on the bed and just laid there, wrapping myself in a blanket of self-esteem issues and tears. Thirty seconds later, Bandit jumped on and started giving me kisses. He pushed up my chin and placed his head under my neck. My heart melted; somehow he always knows when I am sad.

I guess I’ll just buy a new dress. One that isn’t tight. Maybe a little black dress. Every girl needs at least one of those, right? I did end up getting a black dress. Pictured with my lovely friends Sarah & Allison. 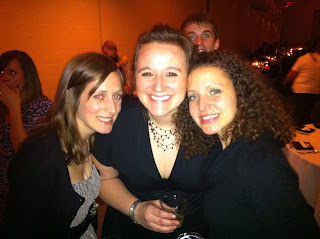 I went to the gym early on Saturday morning, despite the giant boulder that was resting inside my stomach. I had cheated on Wednesday and had a breakfast sandwich that had cheese on it. I am certain that was what caused this serve pain in my stomach. I’ve been regretting that sandwich ever since…
When I came back, Justin was still in bed. But I wasted no time waking up to let him know I was hungry.

By the way, when I am hungry – I turn into Godzilla. I’m awful to be around and want to smash everything and everyone that comes into my path. Justin said he was hungry too, but he was moving at the speed of a stoned elephant.

Of course, this was a sweet question. He was letting me decide, but I am awful at making food decisions. Justin would argue I am bad at making decision all together. I always want someone else to select where we eat and what appetizer we order. But, of course, what sounds good to me is cheesy pizza, cheese sticks, cheeseburgers, mac and cheese, etc.

“Babe, you’ll need to pick; you know I can’t make a decision,” I said back.

Then I started to develop a tail and my skin started getting bumpy. Yup, Godzilla is busting through the surface.

I did not like his laugh at this moment. I grew monstrous teeth and spikes. Oh no, here comes Godzilla.

“FINE! YOU KNOW WHAT I WANT! I WANT A CHEESEBURGER, BUT I CAN’T HAVE THAT! I CAN’T HAVE ANYTHING ANYMORE!” I screamed.

“OH MY GOSH Ashley,” Just screamed back from the bedroom. “You can’t have cheese! Big deal!”

BIG DEAL!?!?! Inside my body grew a deep roar and flame blew outside of my mouth.

“YOU HAVE NO IDEA WHAT I AM GOING THROUGH!” I yelled back. “EVERYTHING HAS CHANGED! MY WHOLE DIET.”

I stopped for a moment. I’ll bet this is when I grew my Godzilla claws.

“YOU SHOULD PUT YOURSELF IN SOMEONE ELSE’S SHOES AND HAVE SOME SYMPATHY FOR ONCE!” I yelled back. (This was extremely dramatic and out of line because Justin is one of the most loving and supportive people I’ve ever known. I was just a crackhead needing my drug. I needed my cheese. Don’t worry – I said sorry right away and now we are joking about how dramatic I was).

I grabbed my purse and started to walk out.

“FINE!” I yelled back realizing that the word “fine” is used in almost nearly every single fight. But it’s never a good word. Fine never means everything is alright. It’s the opposite. It’s not fine.

But as I made my dramatic exit, I forgot my keys. So, I had to walk back into the apartment and act like everything was still “fine” – and off I went.

I started bawling. As rain was crashing down my car, tears were pouring out of my eyes. Earlier that morning, I was thinking of my grandpa while running. I usually do because my fundraising efforts for the American Heart Association are for him. I’m dedicating my race on May 7, 2011 to him.

In my heart, I believe Grandpa was talking to me through this song. I’ve been talking to him during my run through my heart and mind, so this was his message back to me. 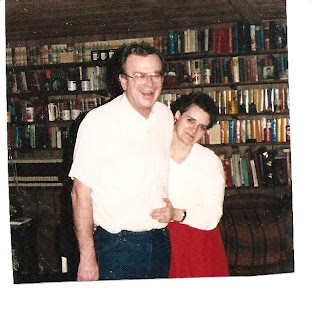 “You are perfect me.”

And I know Justin feels the same way too. Stupid cheese fight.

I cried even harder…

The Emenhiser and Rice wedding was this weekend. It was an absolutely beautiful wedding. Matt and Lindsay are two of the most loving people I know. They will grow old together and still be just as cute as they are today…. 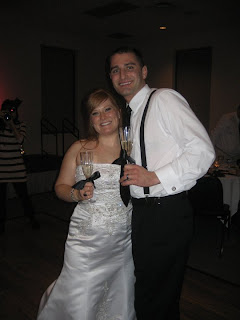 I didn’t get a chance to hug Lindsay and Matt after the wedding during the receiving line because we were in the balcony. So, we didn’t want to be super awkward and run budge in front of people. So we decided to hug them in at the reception. A hug is certainly not the word to describe what I gave Lindsay. A takedown might be a better description.

I was talking to one of the bridesmaids, Shari, when I heard Lindsay yell my name. I ran over to give her a hug. Preface: I was in heels. I barely wear heels for reasons about to be exposed…

I leaned down and gave her a big hug. I’m obviously tall, so as I went to stand up- I didn’t let go of Lindsay. In fact, I lifted her up in the air like a 5 year old, which was SUPER cute until I lost my balance.

My feet were sweaty and my shoes were loose. I felt my heels wobble from side to side. Lindsay let out a squeal and I felt heads start to turn our way. Just in time to see my body lean backwards.

I was falling in what felt like slow motion. I knocked into a bridesmaid who had just got food. Her body flew into some guy and her hand smashed into his crotch. On the way down, my face was placed in Lindsay’s boobs. Down we both went – with me motor boating her the entire way down.

I was super thankful I brought a pair of leggings in my purse and had JUST changed into them – or the entire reception would have seen my offerings.

Thankfully, Lindsay thought it was hilarious and we both laughed.

You see, my weekend was full of tears; some sad tears and other tears from laughing so hard. Either way, I learned that you can always buy new dresses, a lactose allergy is NOT the end of the world and giving hugs is overrated. Watch out future brides, I’m coming after you for a takedown 😉