My husband is constantly on my butt about going scuba diving. Because I can think of a million ways to die on a daily basis, I’m not exactly thrilled about scuba diving again. As most of you know, I have an EXTREME fear of sharks. I would die if I saw one. Either from an actual shark attack or a self induced heart attack. 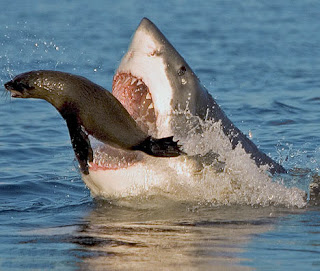 I don’t want to be this seal…..
﻿
At one point, I was half way convinced to go scuba diving in Lake Michigan. Through some research, I learned that the Bull Shark can live in both fresh AND salt water. Insert face of fear again…. 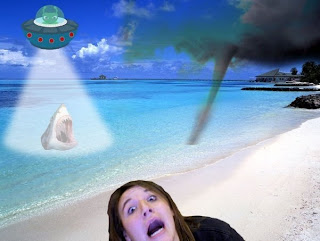 ﻿A picture that sums up my top 3 fears: sharks, aliens and tornadoes.
﻿But today, I made a decision. I made a decision to live my life free of fears. Maybe I’ve had too much green tea this morning, but I’m feeling positive. I have energy to live and my conquer fears. So, I told my hubby I would go scuba diving again. Scuba Siebs 2.0. 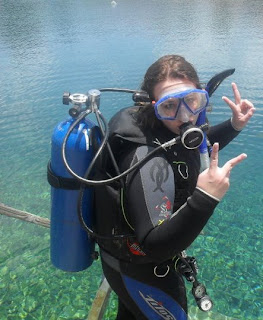 Fact: If you ever feel fat, don’t put a wet suit on.﻿
﻿I wrote on his Facebook wall, announcing my decision to world:
“So yes, I’ll do this scuba diving thing in Lake Michigan. If I die by a Bull Shark in a lake…then it really was a rational fear all along and God really needs me in Heaven. Furthmore, I want you to start out my eulogy by saying, “Ashley always knew she would die from a shark attack, but no one ever knew it would be in a lake…”